As one of the leading plumbers in Ripley and Amber Valley, we thought we'd delve into the history of what we do, and it turned out to be quite interesting!

Nowadays we take plumbing and hot and cold running water a bit for granted, but there was a time, a long time ago, that this didn't exist. Going back to 2600BC, with rudimentary channels, to the advent of plumbing in Rome. What did the Roman's ever do for us, eh?

The timeline below shows the progression of plumbing from 2600BC right up to modern day.

2600BC: Ancient civilisations build a system of pipes to carry water from one place to another. There were wells, drains in floors and septic tanks.

2000BC: Pipelines begin to appear in places like China, who used bamboo as pipes to carry fresh water.

1500BC: The Egyptian, Greek and Roman civilisations started to have bathrooms with hot and cold running water, along with flushing toilets and drainage systems. The Egyptians progressed from the early baked clay and straw pipes to copper piping and dug wells, which then bore the water wheel. The Greeks developed showers for athletes to bathe after the Olympic games. The Roman's however, outshone everyone, with water channels from the mountains and underground lead pipes, hot water for the baths, wastewater in sewerage pipes emptied into the Tiber and public toilets. However, there were no sanitary practices so disease was rife.

600BC: The palace at Babylon had bathrooms with drainage and toilets, complete with sewer system. They also had a rudimentary irrigation system for the Hanging Gardens!

Plumbing didn't really advance much from here until Medieval times.

From 476AD: In Medieval Europe monastaries and castles were beginning to consider sanitation. There is evidence that waste that was dropped into rivers was then removed by servants. In everyday homes there would be hot and cold water for washstands, although this water was ceremonially thrown out of the window when finished with. Not so sanitary! They would shout out "Gargyloo" meaning, mind the water, and this is where the word "loo" originates.

Interest in hygiene didn't really start to grow until the Renaissance era, so indoor plumbing didn't take off until then.

1596: John Harington invented the first flushable toilet, which he gifts to Queen Elizabeth I. Apparently it made the most awful noises. At this point, baths were filled and emptied by hand and baths were taken roughly once a month.

1778: Joseph Bramah using hinged valves to improve the toilet design and allow it to be used aboard ships.

1795: New York used wooden pipelines to create a firefigting water system. The hollowed out logs were put through walls where there was a fire and the firefighters would have to plug up the holes in the wall once they had put the fire out.

1810: The English Regency Shower was invented, which pumped water from a lower basin to a cistern overhead, recycling the same waste water.

1829: The Tremont Hotel in Boston built indoor toilets, becoming the first hotel with indoor plumbing and running water for their guests.

1848: England passed the National Public Health Act, which became the plumbing code for the entire world.

1851: The first public toilets were installed in The Crystal Palace and visitors were charged a penny to use them.

1856: America gains its first integrated sewer system in Chicago because of the massive amount of waste being dumped into the Chicago River and Lake Michigan. With the development of electricity, bathrooms were now in homes complete with plumbed baths and kitchens now had running water.

1857: Toilet paper was invented by Joseph Gayetty and was sold in flat sheets.

1858: England gets its first sewer system in London.

1870: The ceramic flush toilet was invented by Thomas Twyford, a pottery manufacturer. Water heaters also started to be installed in private houses.

1883: The cast iron bathtub was invented by John Kohler. It was made from an iron horse trough.

1885: The first WC, encased in a wooden cabinet, is designed by Fredrick Humperson.

1911: The Kohler company made the first one piece bathtub.

1937: The single hand mixer tap was invented by Alfred Moen.

1940: During the second world war, the shortage of iron, steel and copper forced the plumbing industry to look at other materials. It was then that the use of plastics were introduced.

Today: There are all types of weird and wonderful gadgets; from toilets that talk, to rainforest showers. Haven't we come a long way from the hollowed out bamboo?

WANT US TO CALL YOU BACK? 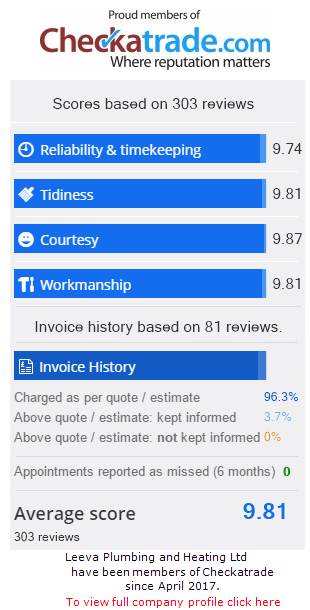 Our experienced and helpful team are always happy to help

Call us today for a free no obligation quote »

Please complete the form below and we will provide you with a quotation for a new boiler asap.